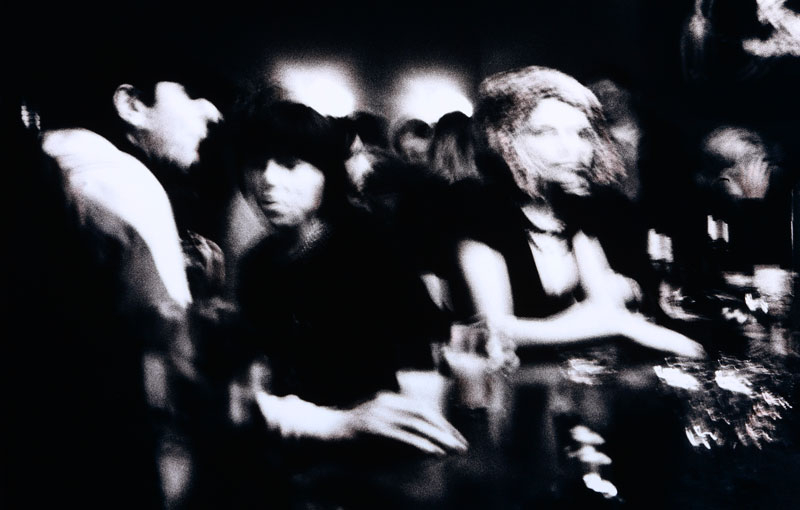 The day is light, the night is twilight. As early as 1857, Charles Baudelaire wrote in his poem Le Crépuscule du soir of man’s guise which would morph, animal-like, under the “black curtain” of night. Darkness, it is the place of trap doors and two faces.

The theme of darkness (twilight), the magical time before the break of dawn, pervades the work of the photographic artist, Torsten Warmuth (b.1968, in Hildburghausen). In 2006, the museum Kunsthalle Erfurt presented Warmuths’ series Nachtsammler/ Night Gatheres – a 19-piece work that reveals the people of Argentina’s Buenos Aires as they gradually succumb to the shadowy existence of the capital’s pallid light of night.

With Belle de nuit Torsten Warmuth again reaches out to this world of the darkness, but, this time, he shifts his focus. In this photographic cycle, all boundaries appear to change. Warmuth shows Orphic-Bacchic games of carousers, gamblers and graces in the half light of a bar. It is a night piece from the “Theatrum mundi”: One sees the entrance of blonde beauties and the youth lying in wait; one sees drinkers lost in nostalgia and dancers in heated fervour. Between waiting and longing, between posturing and flirting, eyes cross and desire is met.

Belle de nuit stages night as a place of obscurities and transitions. Just as Brassaï noted, in his images of the nocturnal playgrounds of Parisian cafes, forces at work that elude the normal reaches of the human mind, it seems that Warmuth’s images also escape into an odd realm of trance and dreaming. On his nocturnal stage, definitude becomes blurred and identity lapses into a whirling dervish. Often, time and place even seem to dissolve altogether in these photographs.

The photographic series, Rauschendes Glück, also records the remarkable ways in which some people choose to escape. Their behavior and guise allow them to move between realities – time travelers from the past, who tirelessly pursue the future. These photographic scenes are seen as if through the haziness of a dream. This effect is produced through overlays and the veil of movement. Since his earliest work Torsten Warmuth has experimented with complex long- and multiple-exposure techniques. Warmuth captures these timely, spontaneous moments through his large-format camera which he tugs along and loads with traditional, analogue film. In the end, Warmuth’s large format gelatin silver prints, each, are occupied with its own subjective magic, a magic partly formed by the emotion of the nightly figures at the moment of being photographed. The Belle de nuit, is a great homage to the many metamorphoses of the night.